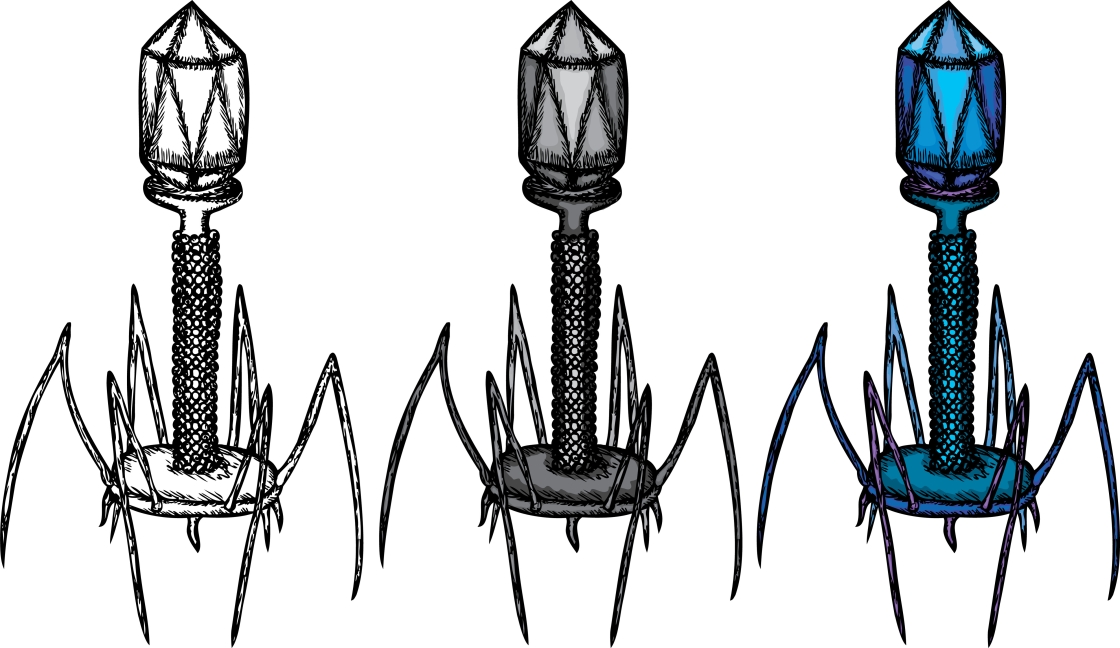 What is a Bacteriophage?

A bacteriophage or phage is a virus that infects and kills bacteria, in direct translation, a “bacteria-eater”. Contrary to what the media would have you believe, not all viruses are bad!

Phage have gained quite a notorious reputation, earning titles such as “the dark matter of the biosphere“, “the most abundant organisms in nature”, “not dead but not alive”, “puppet masters of their bacterial hosts“, “the police of the microbiome“, and even “the deadliest being on planet Earth“.

Viral ecologists proudly declare phage to be “the most abundant and diverse biological entities on the planet”.

Despite their astounding abundance, our knowledge of phage has advanced at a slower pace compared to their bacterial counterparts,.This can be chalked down to a number of reasons, one being that phage are difficult to culture. If you cannot isolate and grow the virus in vitro it is challenging to understand how they would behave in their natural environment..

Of course that hasn’t stopped scientists from trying and numerous novel phage have been isolated and used as models in experimental studies. In fact, the first complete genome to be sequenced was the phage φX174 in 1977.

If you can’t isolate an individual phage, the next approach is to take a sample of all the organisms present from an environment and hope to find some phage.

Viral metagenomic studies have really put phage biology on the map, allowing the discovery of novel phage species in diverse environments ranging from the human gut, varying soil types and the deep ocean.

Metagenomic studies sequence all the DNA present in a sample (i.e. stool, soil, water) from this individual organism genomes can be assembled to identify who is present at what quantity and what genes are encoding what functions.

As with most things in this strange universe, the more you know the more you know you don’t, and that certainly rings true for phage. Of the growing number of sequenced phage, there are more phage sequences which remain uncharacterized, as they are not similar to any that’s already been sequenced.,

In other words, each isolated phage is completely different genomically from the rest. This uncharted genomic territory has been deemed viral dark matter.

A 2020 metagenomic study sampling the Yangtze river in China doubled the number of known RNA viruses proving that much remains to be uncovered in the realm of virus discovery.

Phage are found in every explored biome, from the human gut to the deep oceanic basement and even in fossilized stool specimens.

Keen bacterial snipers, phage play a prominent role in the ecosystems they occupy. In the ocean they contribute to biogeochemical cycling, in a process called the viral shunt where they influence the flow of carbon through killing bacteria. It is estimated that half of all bacteria on Earth are killed every 48 hours by phage!

An angle of the microbiome I hadn’t considered until recently is the virome. Here scientists are motivated to uncover the relationship between healthy or diseased individual’s and their virome.

A highly diverse, individual-specific and stable population of viruses has been found to exist in the gut for over a year (n=22).

In the human gut or microbiome, the resident population of phage known as the phageome contribute to homeostasis, evolution of bacterial populations and gene cycling through horizontal gene transfer. with their bacterial hosts..

I was blown away to learn that the total quantity of phage particles in the biosphere (1031) is 10 times that of bacteria..

It’s impossible for the mind to comprehend such a number but this paper on marine viruses gives conceptualizing it a go stating “The estimated 10^30 viruses in the ocean, if stretched end to end, would span farther than the nearest 60 galaxies”.

This 10:1 virus-to-microbe ratio (VMR) observed in other ecosystems is interestingly much lower in the human gut, estimated at ~0.1:1 (Shkoporov and Hill, 2019).

Phage have been thought to cull the most populous bacteria, battling in waves of resistance and counter resistance, allowing the rarer species to emerge and flourish. Future research may find that phage and bacteria exist harmoniously in the gut and phage in certain concentrations and have a benign relationship with their hosts.

This field of population dynamics and interactions within the microbiome, although complex and difficult to conclusively pinpoint, could reveal a symbiosis between viruses and bacteria, showing that bacteria too benefit from the presence of phage.

Like all viruses, phage are intracellular parasites. But instead of infecting mammalian cells and tissues, they have a penchant for bacteria and are unable to enter human cells.

Being among the first multicellular lifeforms on Earth, phage are thought to be been engaged in ancient arms race against bacteria for 3 billion years.

Billions of years of evolution, the “slow boil” or chopping and changing of genes, have guided the selection of highly sophisticated attack and defense mechanisms in phage and bacteria respectively.

Phage are so adapted for their purpose, they represent life distilled to its most minimal unit. Existing as a “non-living” single or double strand of DNA or RNA encased in a protein body is enough for phage to perpetuate their cycle of life.

In the microbial ecosystem, phage are bacteria’s natural predator. This means that for every unique species of bacteria in our body or in the environment, there is likely to be at least one phage with target specificity for that bacterial species.

It’s not surprising then that scientists are keen to understand the relationship between bacteria and phage, the role of phage in the microbiome, as well as the highly sophisticated technology phage use to replicate and destroy their microbial targets, and bacteria use in defense..

By identifying which phage target which bacteria, we can utilize phage in a therapeutic manner or as a medicinal tool against bacteria.

Most of us are familiar with the narrative outlining the impending microbial resistance to antibiotics and the rise of mutant super-bugs. All hope is not lost however as the field of phage therapy, which hijacks phage’s natural predisposition and role as a predator in the microbial ecosystem to kill bacteria, is coming back into fashion.

I imagine in the not-so-distant future, administering doses of live phage will be normalized and standard protocol. External to an experimental setting, we’ll be sending this viral crusader circulating to the point of infection or bacterial overload to seek and destroy.

Phage were discovered independently by William Twort in 1915 and Felix d’Herelle in 1917. Although Twort was the first to describe them, d’Herelle immediately understood what phage were.

Phage have a fascinating political history. From their discovery in 1917, they were overlooked and marginalized to the point where their authenticity of even being a virus was disputed until the birth of the electron microscope in the late 1930’s.

D’Herelle was a French-Canadian, self-taught microbiologist, and an unpaid volunteer at the Pasteur Institute in France, 1916 when he discovered phage in dysentery samples. Motivated to follow in the footsteps of Pasteur, the discovery of phage and his theories surrounding them begged to provide him with an extraordinary scientific opportunity and lead.

Twort, a British microbiologist, described phage as a “transmissible glassy transformation” of bacteria but never elaborated on his observations. This created two opposing groups of scientists who were at odds with one another on phage identity.

The thesis of D’Herelle’s work happened to challenge none other than Bordot, the director of the Pasteur Institute who had been awarded a Nobel Prize in 1919 for his work on bacterial lysis via antibodies. To cut a long story short, Bardot considered phage to be a lytic enzyme, keeping in line with his own work. This resulted in a 10 year smear campaign by Bardot on D’Herelle which tarnished D’Herelle’s reputation and resulted in the scientific community siding with the then famous Bardot.

Interestingly, during the second world war, electron micrographs of phages from German literature made their way to France, finally confirming D’Herelle’s findings.

I can only imagine the wonder upon discovering these minuscule monsters inside bacterial cells! Despite EM images confirming phage existence, advancements in phage therapy were still overshadowed by the broad-spectrum, easily isolated and administered antibiotics of the Pasteur Institute.

Not the first transformative and provocative bit of science to be slowly accepted, the concept of phage was too complex and the world wasn’t ready for such an alien organism.

D’Herelle would be delighted that 100 years later we are “on the cusp of a post-antibiotic era” and our knowledge of phage has increased exponentially.

When phage studies finally gained traction though, breakthroughs in the understanding of phage physiology and genomics went hand-in-hand with our understanding of the fundamental principles underlying molecular biology and advances in biotechnology.

Phage have been described as a “victim of their own success” with understanding established by phage research allowing scientists to work on much more complicated organisms.

Our knowledge of the war between bacteria and bacteriophages has yielded many groundbreaking biotech tools.

Not only are phage physiologically remarkable, having a massive influence on the nanoscale microbial world, they have also made a massive contribution to advancing science.

In part 2 I will discuss the more granular aspects of phage biology:

Since it's my first time growing these herbs it's always surprising to see how they turn out. I just plant them, occasionally ponder their identity while they're slowly growing green tufts ("I think I planted... marigold there?") and then get shocked when I eventually return to beautiful orange flowers.
Bee gorging on chamomile.
First little sample of chamomile.
So I went pretty turbo with the chamomile and have more than I know what to do with 😅. Hoping to get topsoil this week so I can get the polytunnel going to its full grow capacity. I also need to learn how to store and harvest chamomile for tea and prove my parents wrong that my "greens" are actually good for something lol. I might also consider expanding into some edibles... Onions, carrots, tomatoes....
Noticed this gorgeous wildflower on the beach in Carlingford today. English Scurvygrass.
Lovely to see the primroses dense in the hedgerows now.